I’m starting a new project on my blog, which is going to be called From My Shelves. I’m going to review books that I already have in my possession, a lot of which I either haven’t read in a long time or haven’t read at all. I really don’t like being one of those people who owns books that they haven’t even read, and so I think this is going to be a really fun way to get me to a place where I can say “yes, I’ve read this, and I think ______”

For now, this is going to be a bi-weekly thing on my blog. The kinds of reviews are going to be pretty eclectic – I own contemporary fiction, a million classics, children’s and YA books, and nonfiction books on everything from bike repair to Harry Potter cooking.

It’s going to be a fun time.

Oh, and I should mention that I’m going to try to review book series in one post instead of each book separately, since that saves all of us a lot of time.

Which brings me to my first From My Shelves review/discussion…. 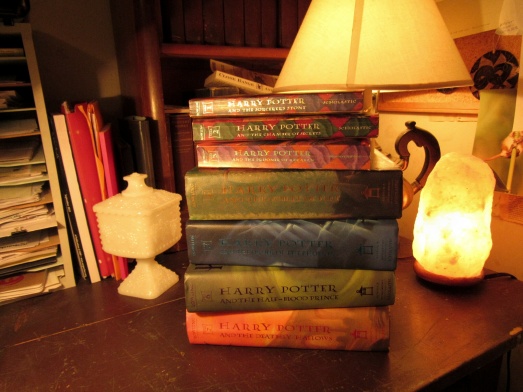 Where did these books come from?

I started reading Harry Potter in fifth grade, when the first three were already out. So I have a box set in paperback of the first three, which I believe my mom bought at CostCo or something after I had already read them.

Afterwards, though, since my birthday happens to be at the end of July, it became a tradition that my sister would buy me the new Harry Potter book for my birthday each year. And so, every book after the third one is simply the first hardback edition printed in the United States.

Tell me about the plot…

Okay, I’m sure that everyone who reads this will have already read Harry Potter, but on the off chance that you haven’t…..

The Harry Potter series follows Harry Potter’s adventures in the wizarding world, from when he finds out he’s a wizard at eleven years old to his battle with the Dark Lord in the final book when he is seventeen.

I really don’t feel like I need to go beyond that. If you haven’t read the series, read it. Even if you’re an adult. It’s important.

What did I think of it?

I haven’t read the books in probably six or seven years – maybe more. I used to read them almost once a year back in high school, but I haven’t picked them up more than once since then. All the time that has passed from my last reading made this reading a lot more enjoyable, I think. I forgot so many little details and was able to rediscover so many different things from a new perspective.

From the very beginning – when I picked up the first book and started reading the first chapter – I was in awe at this world that JK Rowling created. There are so many little details in the very beginning of the series that would not play out until the very end. For instance – the fact that Dumbledore had James Potter’s invisibility cloak when he died was mentioned in the first book and then didn’t play out until the very end, in the chapter where Harry speaks to Dumbledore after Voldemort attempts to kill him in the Forbidden Forrest. As I was able to look at the whole series from more of a writer’s perspective, I was completely in awe of JK Rowling’s storytelling/plot planning skills. I’d love to know more about her process: did she know the details of the last book at the beginning or did she just use things she had already written in such genius ways? I think I’ll need to do more research on that.

There were so many parts of this series that I forgot about completely. I have never been able to remember the plot of the fifth book at all – and I can see why now. Umbridge crawled beneath my skin while I was reading it, Hermione and Ron won’t stop arguing and can’t admit they’re into each other, and Harry is angsty and frustrated about everything.

I also have a lot of questions about how these talking portraits work. Are they a separate being from the person who lived? Do they have an imprint of the person’s memory? How? I need to know.

My favorite Harry Potter book when I was growing up was always Goblet of Fire. I think because I loved that romance was budding between the characters and I thought that the Yule Ball seemed fun. Now, I might have to say that the third is my favorite. But just at this current moment.

How could I ever choose a favorite character? I love Luna so much…and Hermione, and of course Hagrid, and Mr. Weasley, and Fred and George, and God, Ron is just so humorously written. I don’t think I could ever choose just one.

To sum up my feelings on Harry Potter, JK Rowling made this tweet once that tears me up every time I read it…. 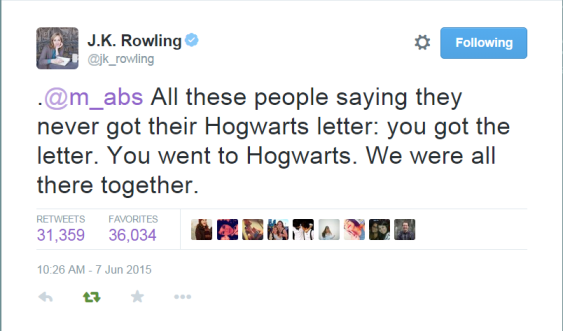 And all I have to say is that I feel so lucky to have grown up with this series and to be able to go back to it whenever I want to. It was such a wonderful way to break back into fiction that has not been assigned to me, fiction that I chose to read simply for pleasure. I can’t wait to come back again.

Will I keep these books?

Does anyone else out there turn to the Harry Potter books when they just need something to read that makes them happy? How does everyone else feel about the ending? I personally feel like the last line before the epilogue is the perfect ending.

One thought on “From My Shelves: The Harry Potter Series”